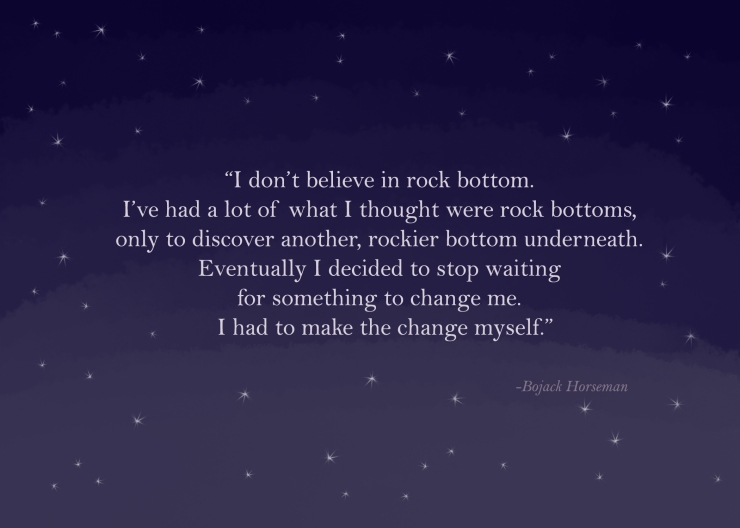 It was completely backwards, but I really wanted to take a few shots before my first AA meeting.

Whenever I had been nervous about an event or meeting in the past, I would have a couple of drinks to calm my nerves. My blood would stop boiling, my heart rate would decrease, and I would feel a sense of purpose and confidence wash over. But doing things like that is what got me addicted to alcohol to begin with, and I doubted that starting my sobriety by downing vodka before an Alcoholic’s Anonymous meeting would go over well. Both with myself, and the people there, who I was sure would be able to smell the drink wafting from my skin.

So I went alone, I went sober, and I went anxious. I climbed the creaky wooden steps to a stiflingly warm attic space with cobwebs on the windows and worn floorboards. I sat in the back row, uncomfortably shifting on a folding chair, surreptitiously eyeing the men around me – I was the only woman in the room besides a girl at the front who was handing out chips. My social anxiety intertwined fingers with my denial, who was still pretending that maybe I wasn’t an addict, that maybe I didn’t need to be here, and began skipping faster and faster around my head. I was early to the meeting, because that’s who I am as a person, so by the time the meeting started, I was sweating and envisioning myself bolting for the door.

There were about 20 to 25 people in attendance, but in my mind it felt like 100. Everyone began going around the room to introduce themselves: “Hi, I’m [your name], and I’m an alcoholic”. Back in high school, I took a Latin class in freshmen year where the teacher would have us go around the room and translate a sentence from the textbook. It had stressed me out so much I would feverishly count ahead, trying to figure out based on the students and the passage which sentence I would get. I would be shaking by the time it was my turn, praying that I had translated it correctly. My fear of failure, of public rejection, of being seen as a fool was incredibly strong. I was transported back to that feeling during AA.

But when I finally took a breath and said out loud what I never had before, “I’m an alcoholic”, something changed inside me. It was a complicated emotion, one that had two sides: firstly, it was the first time I was acknowledging the fact that my drinking problem wasn’t just a moderation issue or an impermanent nuisance that I could eventually fix. I was telling myself, and a room full of strangers, that I could not drink – not now, not ever. And secondly, I wasn’t ready for that. I had made the decision to get sober a few days before. I was still dealing with a lot of conflicting emotions and thoughts. In a way, I felt pushed into saying that I was an alcoholic, even though it was true. Part of me wanted to announce it on my own terms after I had accepted it. AA was the equivalent of being pushed into the deep end of the pool to learn how to swim: I did learn, but it was still traumatic. I can do the dog paddle now, but I’ll always be a little resentful of how I was taught against my will.

I got my 24 hour chip that first meeting. I was surprised at myself. The girl at the front called out, “Does anyone have 24 hours?” And I did – I had just made the decision to finally get sober. But I hadn’t planned on making a spectacle of myself by raising my hand, chirping, “Oh, I do!”, and trotting to the front of a room full of men I didn’t know and accepting a coin like a beggar gathering alms.

Then came the sharing portion, which mercifully, saw the room broken up into smaller groups of 5 or 6 people – much more manageable for my anxiety. It was still strange though. Talking about the steps, getting an insight into other people’s minds, awkwardly introducing myself and admitting it was my first meeting – it was all very intense. By the time I left I felt relieved, drained, intrigued, grateful, and exhausted all at once. I was glad I went, but I decided a week or two later that it would be my last meeting.

I completely understand what people get out of AA. I see why it can be helpful for some. I can also see why people hate it. Despite being a person who thinks of the world in black and white, I found myself feeling pretty apathetic about AA. The pros and cons washed each other out. I decided I was fine not going anymore, but I would also encourage others to check it out for themselves.

Here is what I thought overall about AA:

Ultimately, AA isn’t for me. I liked parts of their system, I read sections of the Big Book, and I adopted certain processes into my life and moved on. (The idea of making amends especially stuck out to me.) I think the good thing about trying different things in sobriety is that you can gather the tools that work for you and build your own Sobriety Kit. Mine is a hodgepodge of things I’ve learned from years of CBT, plus random shit I picked up from Instagram, AA, or distress tolerance exercises. If AA isn’t your thing, that’s fine, but maybe you can take aspects of it you DO like and weave it into your sobriety journey. The most important thing is that IT WORKS. Whatever works for you, keep doing that. AA or otherwise.